🚧 This EIP had no activity for at least 6 months.

Communicating with dapps currently requires paying ETH for gas, which limits dapp adoption to ether users. Therefore, contract owners may wish to pay for the gas to increase user acquisition, or let their users pay for gas with fiat money. Alternatively, a 3rd party may wish to subsidize the gas costs of certain contracts. Solutions such as described in EIP-1077 could allow transactions from addresses that hold no ETH.

The gas stations network is an EIP-1077 compliant effort to solve the problem by creating an incentive for nodes to run gas stations, where gasless transactions can be “fueled up”. It abstracts the implementation details from both the dapp maintainer and the user, making it easy to convert existing dapps to accept “collect-calls”.

The network consists of a single public contract trusted by all participating dapp contracts, and a decentralized network of relay nodes (gas stations) incentivized to listen on non-ether interfaces such as web or whisper, pay for transactions and get compensated by that contract. The trusted contract can be verified by anyone, and the system is otherwise trustless. Gas stations cannot censor transactions as long as there’s at least one honest gas station. Attempts to undermine the system can be proven on-chain and offenders can be penalized.

The system consists of a RelayHub singleton contract, participating contracts inheriting the RelayRecipient contract, a decentralized network of Relay nodes, a.k.a. Gas Stations, and user applications (e.g. mobile or web) interacting with contracts via relays.

Roles of a Relay node: 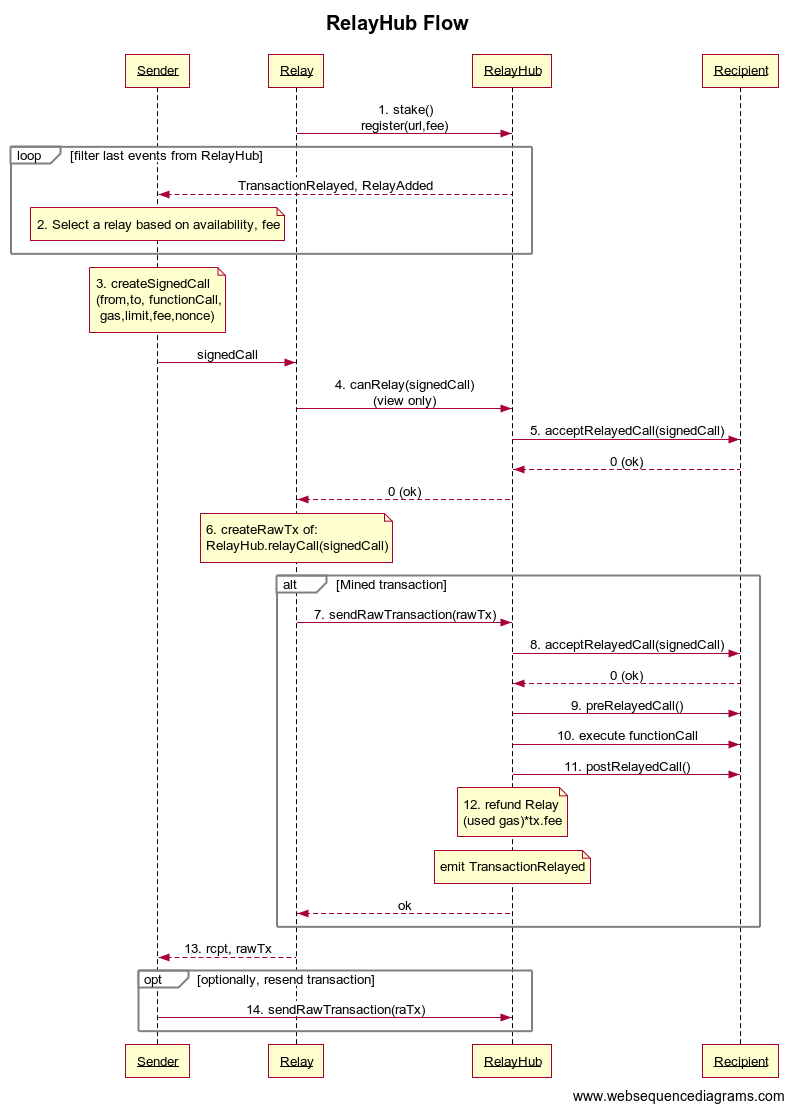 The process of registering/refreshing a Relay:

The process of sending a relayed transaction:

The process of winding a Relay down:

The rationale for the gas stations network design is a combination of two sets of requirements: Easy adoption, and robustness.

For easy adoption, the design goals are:

The robustness requirement translates to decentralization and attack resistance. The gas stations network is decentralized, and we have to assume that any entity may attack other entities in the system.

Attack: Relay attempts to censor a transaction by not signing it, or otherwise ignoring a user request.

Relay is expected to return the signed transaction to the sender, immediately. Sender doesn’t need to wait for the transaction to be mined, and knows immediately whether it’s request has been served. If a relay doesn’t return a signed transaction within a couple of seconds, sender cancels the operation, drops the connection, and switches to another relay. It also marks Relay as unresponsive in its private storage to avoid using it in the near future.

Therefore, the maximal damage a relay can cause with such attack, is a one-time delay of a couple of seconds. After a while, senders will avoid it altogether.

Attack: Relay attempts to censor a transaction by signing it, returning it to the sender, but never putting it on the blockchain.

Attack: Relay attempts to censor a transaction by signing it, but publishing a different transaction with the same nonce.

Reusing the nonce is the only DoS performed by a Relay, that cannot be detected within a couple of seconds during the http request. It will only be detected when the malicious transaction with the same nonce gets mined and triggers the RelayHub.TransactionRelayed event. However, the attack will backfire and cost Relay its entire stake.

Sender has a signed transaction from Relay with nonce N, and also gets a mined transaction from the blockchain with nonce N, also signed by Relay. This proves that Relay performed a DoS attack against the sender. The sender calls RelayHub.penalizeRepeatedNonce(bytes transaction1, bytes transaction2), which verifies the attack, confiscates Relay’s stake, and sends half of it to the sender who delivered the penalizeRepeatedNonce call. The other half of the stake is burned by sending it to address(0). Burning is done to prevent cheating relays from effectively penalizing themselves and getting away without any loss. The sender then proceeds to select a new relay and send the original transaction.

The result of such attack is a delay of a few blocks in sending the transaction (until the attack is detected) but the relay gets removed and loses its entire stake. Scaling such attack would be prohibitively expensive, and actually quite profitable for senders and honest relays.

Attack: Relay attempts to censor a transaction by signing it, but using a nonce higher than it’s current nonce.

In this attack, the Relay did create and return a perfectly valid transaction, but it will not be mined until this Relay fills the gap in the nonce with ‘missing’ transactions. This may delay the relaying of some transactions indefinitely. In order to mitigate that, the sender includes a max_nonce parameter with it’s signing request. It is suggested to be higher by 2-3 from current nonce, to allow the relay process several transactions.

When the sender receives a transaction signed by a Relay he validates that the nonce used is valid, and if it is not, the client will ignore the given relay and use other relays to relay given transaction. Therefore, there will be no actual delay introduced by such attack.

In this attack, a contract sets an inconsistent acceptRelayedCall (e.g. return zero for even blocks, nonzero for odd blocks), and uses it to exhaust relay resources through unpaid transactions. Relays can easily detect it after the fact. If a transaction goes unpaid, the relay knows that the recipient contract’s acceptRelayedCall has acted inconsistently, because the relay has verified its view function before sending the transaction. It might be the result of a rare race condition where the contract’s state has changed between the view call and the transaction, but if it happens too frequently, relays will blacklist this contract and refuse to serve transactions to it. Each offending contract can only cause a small damage (e.g. the cost of 2-3 transactions) to a relay, before getting blacklisted.

Relays may also look at recipients’ history on the blockchain, looking for past unpaid transactions (reverted by RelayHub without pay), and denying service to contracts with a high failure rate. If a contract caused this minor loss to a few relays, all relays will stop serving it, so it can’t cause further damage.

This attack doesn’t scale because the cost of creating a malicious contract is in the same order of magnitude as the damage it can cause to the network. Causing enough damage to exhaust the resources of all relays, would be prohibitively expensive.

The attack can be made even more impractical by setting RelayHub to require a stake from dapps before they can be served, and enforcing an unstaking delay, so that attackers will have to raise a vast amount of ETH in order to simultaneously create enough malicious contracts and attack relays. This protection is probably an overkill, since the attack doesn’t scale regardless.

Attack: User attempts to rob dapps by registering its own relay and sending expensive transactions to dapps.

If a malicious sender repeatedly abuses a recipient by sending meaningless/reverted transactions and causing the recipient to pay a relay for nothing, it is the recipient’s responsibility to blacklist that sender and have its acceptRelayedCall function return nonzero for that sender. Collect calls are generally not meant for anonymous senders unknown to the recipient. Dapps that utilize the gas station networks should have a way to blacklist malicious users in their system and prevent Sybil attacks.

A simple method that mitigates such Sybil attack, is that the dapp lets users buy credit with a credit card, and credit their account in the dapp contract, so acceptRelayedCall() only returns zero for users that have enough credit, and deduct the amount paid to the relay from the user’s balance, whenever a transaction is relayed for the user. With this method, the attacker can only burn its own resources, not the dapp’s.

A variation of this method, for free dapps (that don’t charge the user, and prefer to pay for their users transactions) is to require a captcha during user creation in their web interface, or to login with a Google/Facebook account, which limits the rate of the attack to the attacker’s ability to open many Google/Facebook accounts. Only a user that passed that process is given credit in RelayRecipient. The rate of such Sybil attack would be too low to cause any real damage.

Registering a relay requires placing a stake in RelayHub, and the stake can only be withdrawn after the relay is unregistered and a long cooldown period has passed, e.g. a month.

Each unreliable relay can only cause a couple of seconds delay to senders, once, and then it gets blacklisted by them, as described in the first attack above. After it caused this minor delay and got blacklisted, the attacker must wait a month before reusing the funds to launch another unreliable relay. Simultaneously bringing up a number of unreliable relays, large enough to cause a noticeable network delay, would be prohibitively expensive due to the required stake, and even then, all those relays will get blacklisted within a short time.

Transactions include a nonce. RelayHub maintains a nonce (counter) for each sender. Transactions with bad nonces get reverted by RelayHub. Each transaction can only be relayed once.

Attack: User does not execute the raw transaction received from the Relayer, therefore blocking the execution of all further transactions signed by this relayer

As this matrix shows, the relay is always incentivized to execute the transaction, once it returned it to the user, in order to end up in #1 or #3, and avoid the risk of #4. It’s just a way to commit the relay to do its work, without requiring the user to wait for on-chain confirmation.

The gas stations network is implemented as smart contracts and external entities, and does not require any network changes.

Dapps adding gas station network support remain backwards compatible with their existing apps/users. The added methods apply on top of the existing ones, so no changes are required for existing apps.