The growth of the Ethereum state has caused certain opcodes to be more resource-intensive at this point than they were previously. This EIP proposes to raise the gasCost for those opcodes.

An imbalance between the price of an operation and the resource consumption (CPU time, memory etc) has several drawbacks:

If operations are well-balanced, we can maximise the block gaslimit and have a more stable processing time.

Here are two charts, taken from a full sync using Geth. The execution time was measured for every opcode, and aggregated for 10K blocks. These bar charts show the top 25 ‘heavy’ opcodes in the ranges 5M to 6M and 6M to 7M:

Note: It can also be seen that the SLOAD moves towards the top position. The GASPRICE (0x3a) opcode has position one which I believe can be optimized away within the client – which is not the case with SLOAD/BALANCE.

Here is another chart, showing a full sync with Geth. It represents the blocks 0 to 5.7M, and highlights what the block processing time is spent on. 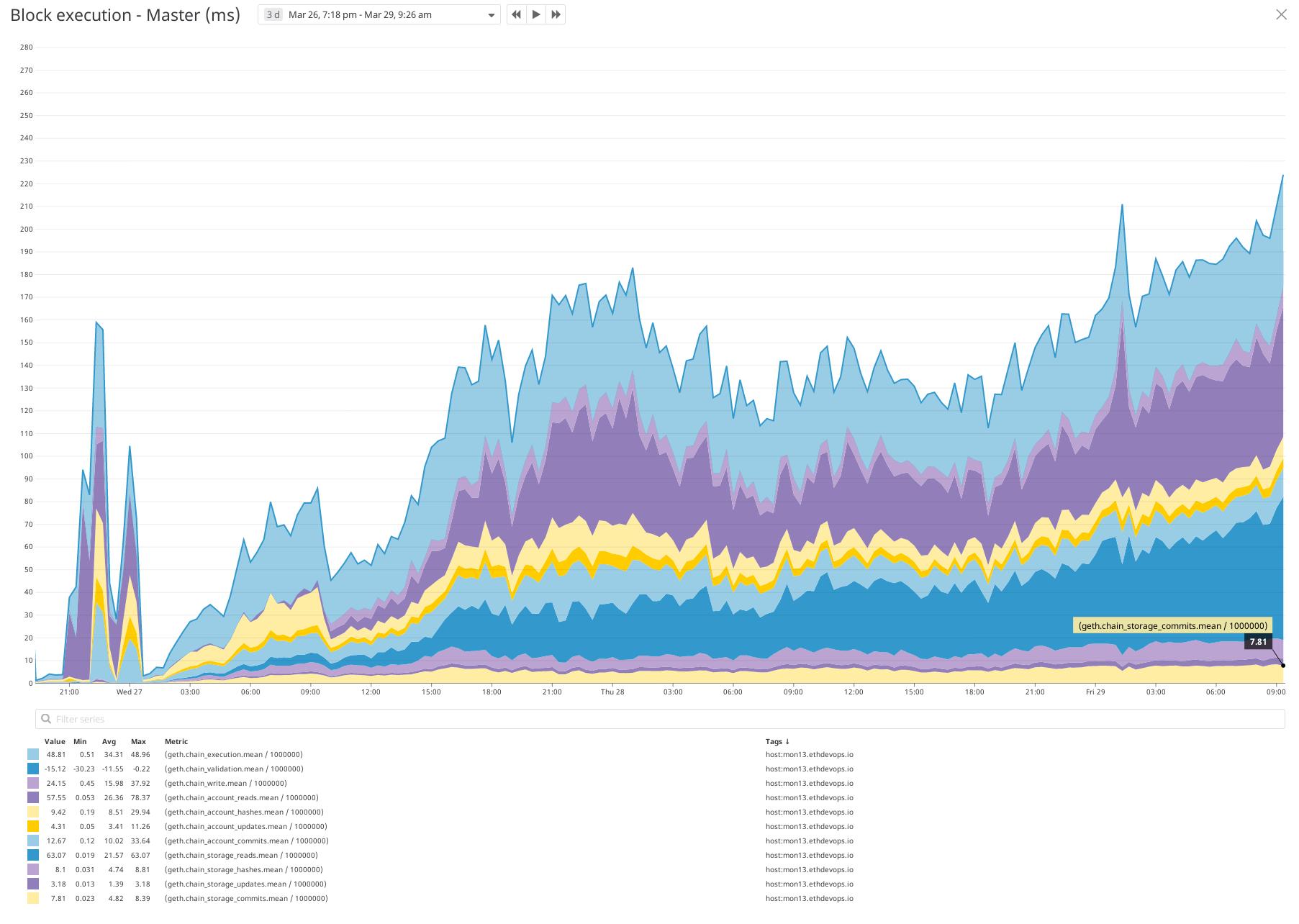 It can be seen that storage_reads and account_reads are the two most significant factors contributing to the block processing time.

SLOAD was repriced at EIP-150, from 50 to 200. The following graph shows a go-ethereum full sync, where each data point represents 10K blocks. During those 10K blocks, the execution time for the opcode was aggregated.

Increasing the cost of SLOAD by 4 would bring it back down to around 40. It is to be expected that it will rise again in the future, and may need future repricing, unless state clearing efforts are implemented before that happens.

BALANCE (a.k.a EXTBALANCE) is an operation which fetches data from the state trie. It was repriced at EIP-150 from 20 to 400.

It is comparable to EXTCODESIZE and EXTCODEHASH, which are priced at 700 already.

It has a built-in high variance, since it is often used for checking the balance of this, which is a inherently cheap operation, however, it can be used to lookup the balance of arbitrary account which often require trie (disk) access.

In hindsight, it might have been a better choice to have two opcodes: EXTBALANCE(address) and SELFBALANCE, and have two different prices.

EXTCODEHASH was introduced in Constantinople, with EIP-1052. It was priced at 400 with the reasoning:

The gas cost is the same as the gas cost for the BALANCE opcode because the execution of the EXTCODEHASH requires the same account lookup as in BALANCE.

Ergo, if we increase BALANCE, we should also increase EXTCODEHASH

The changes require a hardfork. The changes have the following consequences:

I expect that certain patterns will be less used, for example the use of multiple modifiers which SLOADs the same opcode will be merged into one. It may also lead to less log operations containing SLOADed values that are not strictly necessary.

Testcases that should be implemented:

This EIP has not yet been implemented in any client. Both these opcodes have been repriced before, and the client internals for managing reprices are already in place.

This is the implementation for the new opcode in go-ethereum: