Standardise where proxies store the address of the logic contract they delegate to, as well as other proxy-specific information.

Delegating proxy contracts are widely used for both upgradeability and gas savings. These proxies rely on a logic contract (also known as implementation contract or master copy) that is called using delegatecall. This allows proxies to keep a persistent state (storage and balance) while the code is delegated to the logic contract.

To avoid clashes in storage usage between the proxy and logic contract, the address of the logic contract is typically saved in a specific storage slot (for example 0x360894a13ba1a3210667c828492db98dca3e2076cc3735a920a3ca505d382bbc in OpenZeppelin contracts) guaranteed to be never allocated by a compiler. This EIP proposes a set of standard slots to store proxy information. This allows clients like block explorers to properly extract and show this information to end users, and logic contracts to optionally act upon it.

Delegating proxies are widely in use, as a means to both support upgrades and reduce gas costs of deployments. Examples of these proxies are found in OpenZeppelin Contracts, Gnosis, AragonOS, Melonport, Limechain, WindingTree, Decentraland, and many others.

However, the lack of a common interface for obtaining the logic address for a proxy makes it impossible to build common tools that act upon this information. 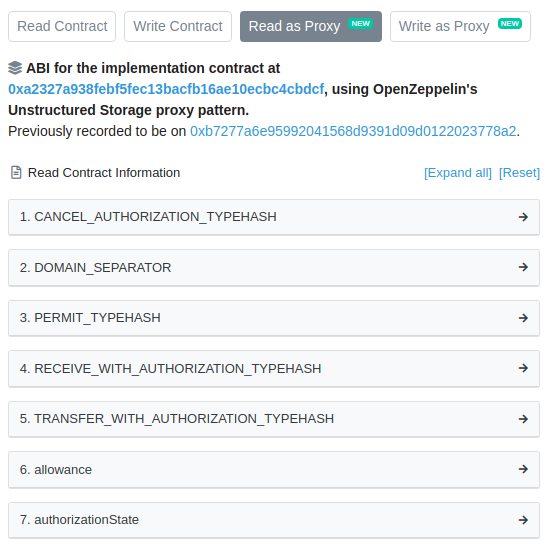 Another example is logic contracts that explicitly act upon the fact that they are being proxied. This allows them to potentially trigger a code update as part of their logic. A common storage slot allows these use cases independently of the specific proxy implementation being used.

Monitoring of proxies is essential to the security of many applications. It is thus essential to have the ability to track changes to the implementation and admin slots. Unfortunately, tracking changes to storage slots is not easy. Consequently, it is recommended that any function that changes any of these slots SHOULD also emit the corresponding event. This includes initialization, from 0x0 to the first non-zero value.

The proposed storage slots for proxy-specific information are the following. More slots for additional information can be added in subsequent ERCs as needed.

Holds the address of the logic contract that this proxy delegates to. SHOULD be empty if a beacon is used instead. Changes to this slot SHOULD be notified by the event:

Holds the address of the beacon contract this proxy relies on (fallback). SHOULD be empty if a logic address is used directly instead, and should only be considered if the logic contract slot is empty. Changes to this slot SHOULD be notified by the event:

Beacons are used for keeping the logic address for multiple proxies in a single location, allowing the upgrade of multiple proxies by modifying a single storage slot. A beacon contract MUST implement the function:

The result of the implementation() function on the beacon contract SHOULD NOT depend on the caller (msg.sender).

Holds the address that is allowed to upgrade the logic contract address for this proxy (optional). Changes to this slot SHOULD be notified by the event:

This EIP standardises the storage slot for the logic contract address, instead of a public method on the proxy contract as EIP-897 does. The rationale for this is that proxies should never expose functions to end users that could potentially clash with those of the logic contract.

Note that a clash may occur even among functions with different names, since the ABI relies on just four bytes for the function selector. This can lead to unexpected errors, or even exploits, where a call to a proxied contract returns a different value than expected, since the proxy intercepts the call and answers with a value of its own.

From Malicious backdoors in Ethereum proxies by Nomic Labs:

Because the function selectors use a fixed amount of bytes, there will always be the possibility of a clash. This isn’t an issue for day to day development, given that the Solidity compiler will detect a selector clash within a contract, but this becomes exploitable when selectors are used for cross-contract interaction. Clashes can be abused to create a seemingly well-behaved contract that’s actually concealing a backdoor.

The fact that proxy public functions are potentially exploitable makes it necessary to standardise the logic contract address in a different way.

The main requirement for the storage slots chosen is that they must never be picked by the compiler to store any contract state variable. Otherwise, a logic contract could inadvertently overwrite this information on the proxy when writing to a variable of its own.

Solidity maps variables to storage based on the order in which they were declared, after the contract inheritance chain is linearized: the first variable is assigned the first slot, and so on. The exception is values in dynamic arrays and mappings, which are stored in the hash of the concatenation of the key and the storage slot. The Solidity development team has confirmed that the storage layout is to be preserved among new versions:

The layout of state variables in storage is considered to be part of the external interface of Solidity due to the fact that storage pointers can be passed to libraries. This means that any change to the rules outlined in this section is considered a breaking change of the language and due to its critical nature should be considered very carefully before being executed. In the event of such a breaking change, we would want to release a compatibility mode in which the compiler would generate bytecode supporting the old layout.

Vyper seems to follow the same strategy as Solidity. Note that contracts written in other languages, or directly in assembly, may incur in clashes.

They are chosen in such a way so they are guaranteed to not clash with state variables allocated by the compiler, since they depend on the hash of a string that does not start with a storage index. Furthermore, a -1 offset is added so the preimage of the hash cannot be known, further reducing the chances of a possible attack.

This ERC relies on the fact that the chosen storage slots are not to be allocated by the solidity compiler. This guarantees that an implementation contract will not accidentally overwrite any of the information required for the proxy to operate. As such, locations with a high slot number were chosen to avoid clashes with the slots allocated by the compiler. Also, locations with no known preimage were picked, to ensure that a write to mapping with a maliciously crafted key could not overwrite it.

Logic contracts that intend to modify proxy-specific information must do so deliberately (as is the case with UUPS) by writing to the specific storage slot.