A diamond is a contract with functionality from multiple contracts that can share internal functions, libraries and state variables.

A diamond is a contract that implements the Specification in this standard.

Terminology from the diamond industry.

What is a Diamond?

A diamond is a contract with external functions that are supplied by contracts called facets.

How a Diamond Works

A diamond stores within it a mapping of function selector to facet address, for example selectorToFacet.

Here is a simple example of a diamond’s fallback function:

An event is emitted any time external functions are added, replaced or removed to report what changed.

A diamond has four standard external functions that can be called to show what facets and functions it currently has.

A diamond can be immutable from inception by not adding any external functions that can add/replace/remove functions. There are number of reasons to do this.

A diamond that is mutable can be made immutable by removing such functions.

A diamond can be upgraded if it has a diamondCut external function or other function(s) that can add/replace/remove functions.

A facet can declare and use state variables but it does it in a way that is safer, easier and more flexible for diamonds.

Facet state variables are declared in structs. Each struct is given a specific position in contract storage. This technique is called Diamond Storage.

Here is a simple example that shows diamond storage and its use in a facet:

Any number of structs, each with a different storage position, can be used by a facet.

By using diamond storage facets can be developed independently, without connection or concern for other facets.

Facets can share state variables by using the same structs at the same storage positions.

Facets can share internal functions and libraries by inheriting the same contracts or using the same libraries.

In these ways facets are separate, independent units but can share state and functionality.

Facets are Reusable and Composable

A deployed facet can be used by any number of diamonds.

Different combinations of facets can be used with different diamonds.

It is possible to create and deploy a set of facets that are reused by different diamonds over time.

The ability to use the same deployed facets for many diamonds reduces deployment costs.

This diagram shows the structure of a diamond: 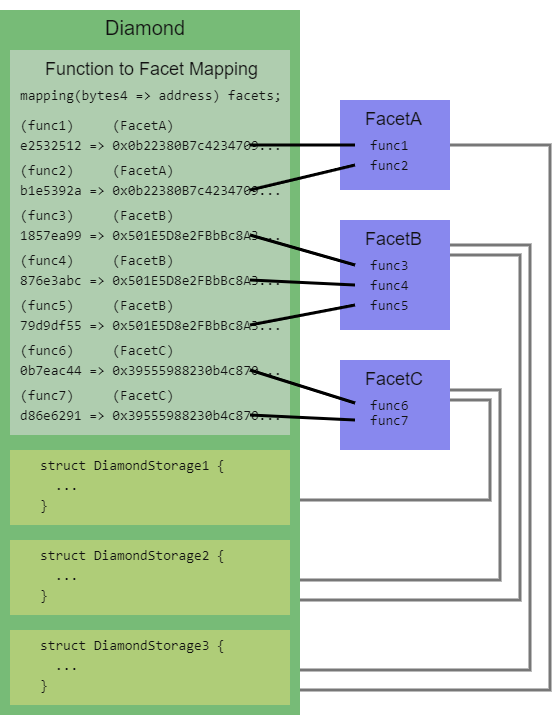 The diagram below shows facets with their own data and data shared between them.

Notice that all data is stored in the diamond. But different facets have different access to data. 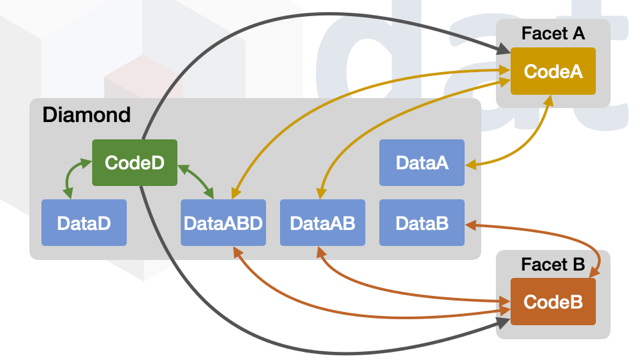 Deployed Facets Can Be Reused

A deployed facet can be used by any number of diamonds. 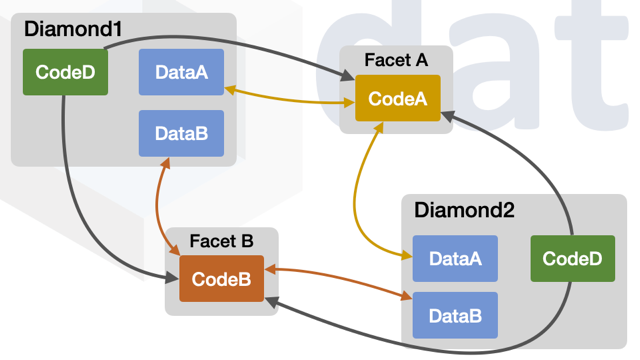 User-interface software can be written to show all documentation, functions and source code used by a diamond.

Diamond events can be filtered from the Ethereum blockchain to show all changes to a diamond.

Existing and new programming libraries and software can be used to deploy, show, upgrade and use diamonds.

Why have an upgradeable diamond instead of a centralized, private, mutable database?

Upgradeable Diamond An upgradeable diamond has the diamondCut function and/or possibly other functions to add/replace/remove functions. It is useful for iterative development or improving an application over time.

Single Cut Diamond A single cut diamond adds all functions to itself in its constructor function, but it does not add the diamondCut function or any other function that can add/replace/remove functions. This means that a single cut diamond is fully created in its constructor and once created can never be upgraded. It has the same immutability and trustless guarantees as a regular vanilla contract. Why would someone do this? There may be a number of reasons. The two use cases below are good reasons.

Note: This specification specifies what needs to be implemented for a contract to be a diamond.

A diamond calls functions from its facets using delegatecall.

In the diamond industry diamonds are created and shaped by being cut, creating facets. In this standard diamonds are cut by adding, replacing or removing facets and their functions.

The standard diamondCut function specified below can be used to add/replace/remove any number of functions from/to a diamond in a single transaction. It has been designed for maximum flexibility while using the least amount of gas.

The diamondCut function is optional. It does not have to be implemented in a diamond. For example an immutable diamond wouldn’t have this function.

If you want to create your own custom function(s) for adding/replacing/removing functions you might also want to implement the standard diamondCut function for interoperability with tools.

In ALL cases any function or code that adds or replaces or removes one or more functions MUST emit the standard DiamondCut event specified below.

The DiamondCut event records all changes to a diamond.

A diamond contains within it a mapping of function selectors to facet addresses. Functions are added/replaced/removed by modifying this mapping.

The _diamondCut argument is an array of Facet structs.

However if a facet address in a Facet struct is address(0) then the function selectors in the same Facet struct are removed. This is how functions are removed from a diamond.

After adding/replacing/removing functions the _calldata argument is executed with delegatecall on _init. This execution is done to initialize data or setup or remove anything needed or no longer needed after adding, replacing and/or removing functions.

If the _init value is address(0) then _calldata must contain 0 bytes or the transaction reverts.

If the _init value is not address(0) then _calldata must contain more than 0 bytes or the transaction reverts.

If _init is address(0) and _calldata contains 0 bytes then _calldata execution is skipped. _calldata is not executed and the diamondCut call can complete successfully.

The _diamondCut, _init, and _calldata arguments are passed directly to the DiamondCut event.

Any time one or more functions are added, replaced or removed the DiamondCut event MUST be emitted to record changes.

The function selectors used by a diamond are queried to get what functions the diamond has and what facets are used.

A diamond loupe is a facet that implements this interface:

See the reference implementation to see an example of how this can be implemented.

The loupe functions are designed for user-interface software. A user interface calls these functions to provide information about and visualize diamonds.

User interface software can be used to retrieve function selectors and face addresses from a diamond in order show what functions a diamond has.

Delegating function calls does have some gas overhead. This is mitigated in several ways:

Since Solidity 0.6.4 it is possible to create pointers to structs in arbitrary places in contract storage. This enables diamonds and their facets to create their own storage layouts that are separate from each other and do not conflict with each other, but can still be shared between them. See this blog post for more information: New Storage Layout For Proxy Contracts and Diamonds. The reference implementation for the diamond standard uses diamond storage.

In some cases it might be necessary to call a function defined in a different facet. Here are some solutions to this:

It is possible to create many different authentication or ownership schemes with the diamond standard. Authentication schemes can be very simple or complex, fine grained or coarse. The diamond standard does not limit it in any way. For example ownership/authentication could be as simple as a single account address having the authority to add/replace/remove functions. Or a decentralized autonomous organization could have the authority to only add/replace/remove certain functions.

Consensus functionality could be implemented such as an approval function that multiple different people call to approve changes before they are executed with the diamondCut function. These are just examples.

The development of standards and implementations of ownership, control and authentication of diamonds is encouraged.

If a person can add/replace functions then that person can alter storage willy-nilly. This is very powerful and very dangerous. However the capability can be used while eliminating or reducing the danger. The danger is eliminated or reduced by limiting who can add/replace/remove functions, limiting when functions can be added/replaced/removed and by transparency.

Who Here are some ways who can be limited:

When Here are some ways when can be limited:

Transparency Transparency provides certainty and proof that upgrades are done correctly and honestly.

Diamonds emit an event every time one or more functions are added, replaced or removed. All source code can be verified. This enables people and software to monitor changes to a contract. If any bad acting function is added to a diamond then it can be seen.

Security and domain experts can review the history of change of a diamond to detect any history of foul play.

The Diamond Standard: A new paradigm for upgradeability

The Diamond Standard is an improved design over EIP-1538 using ABIEncoderV2 and function selectors.

This standard was inspired by EIP-1538 and ZeppelinOS’s implementation of Upgradeability with vtables.

This standard was also inspired by the design and implementation of the Mokens contract.