Accounts for block time in the base fee calculation to target a stable throughput by time instead of by block.

This EIP proposes accounting for time between blocks in the base fee calculation to target a stable throughput by time, instead of by block. Aiming to minimize changes to the calculation, it only introduces a variable block gas target proportional to the block time. The EIP can, in principle, be applied to either a Proof-of-Work or a Proof-of-Stake chain, however the security implications for the Proof-of-Work case remain unexplored.

Base Fee Volatility Under Proof-of-Work

Under Proof-of-Work (PoW), block times are stochastic, and for that reason there exists large block time variability. This variability contributes to the base fee volatility, where the base fee can be expected to oscillate around the equilibrium value even under perfectly stable demand.

Under Proof-of-Stake (PoS), block times are ideally uniform (always 12s), but missed slots lead to individual blocks with increased block time (24s, 36s, …). Such missed slots will result in the next block being overfull, and with the current update rule, signal a fake demand spike and thus cause a small unwarranted base fee spike.

More importantly, these missed slots directly reduce the overall throughput of the execution chain by the gas target of one block. While the next block can be expected to include the “delayed” transactions of the missed slot, the resulting base fee spike then results in some number of under-full blocks. In the end the block space of the missed slot is lost for the chain.

This is particularly problematic because a Denial-of-Service (DoS) attack on block proposers can cause them to miss slots, and compromises the overall chain performance.

A more severe version of individual missed slots can be caused by consensus issues that prevent a significant portion of block proposers from continuing to create blocks. This can be due to block proposers forking off (and creating blocks on their own fork), being unable to keep up with the current chain head for another reason, or simply being unable to create valid blocks.

In all these situations, average block times go up significantly, causing chain throughput to fall by the same fraction. While this effect is already present under PoW, the self-healing mechanism of difficulty adjustments is relatively quick to kick in and restore normal block times. On the other hand, under PoS the automatic self-healing mechanism can be extremely slow: potentially several months to return to normal with up to a third of slots missed, or several weeks if more than a third of slots are missed.

For all these reasons, it would be desirable to target a stable throughput per time instead of per block, by taking block time into account during the base fee calculation.

To maximize the chance of this EIP being included in the merge fork, the adjustments are kept to a minimum, with more involved changes discussed in the rationale section.

Using the pseudocode language of EIP-1559, the updated base fee calculation becomes:

The proposed new base fee calculation only adjusts the block gas target by scaling it with the block time, capped at a maximum percent of the overall block gas limit:

This new calculation thus targets a stable throughput per time instead of per block.

Under PoS, block time increases always come in multiples of full blocks (e.g. a single missed slot = 24s instead of 12s block time). Accounting for this already requires doubling the block gas target, even for a single missed slot. However, with the block elasticity currently set to 2, this target would be equal to the block gas limit. Having the new target equal to the block gas limit is less than ideal, and thus is reduced slightly, according to the MAX_GAS_TARGET_PERCENT parameter. The reason for the existence of this parameter is twofold: 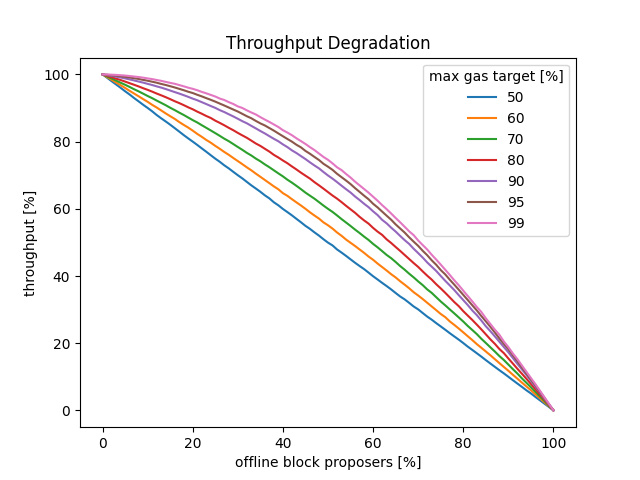 As can be observed, while this EIP does indeed increase the robustness of the network throughput in cases of offline validators, it does so imperfectly. Furthermore, there is a tradeoff effected by the MAX_GAS_TARGET_PERCENT parameter, with a higher value resulting in a higher network robustness, but a more impaired base fee adjustment mechanism during times of frequent missed slots.

These limitations directly result from the design goal of a minimal change, to maximize chances of being included in the merge. There are natural ways of extending the EIP design to more effectively handle offline validators, at the expense of somewhat more extensive changes:

To be able to compensate multiple consecutive missed slots, a gas buffer could be introduced, that would allow the gas beyond the block elasticity to be carried forward to future blocks. To avoid long-run buffer accumulation that would delay a return to normal operations once block proposers are back online, a cap on the buffer would be added. Even for a relatively small buffer cap, the throughput robustness is significantly improved: 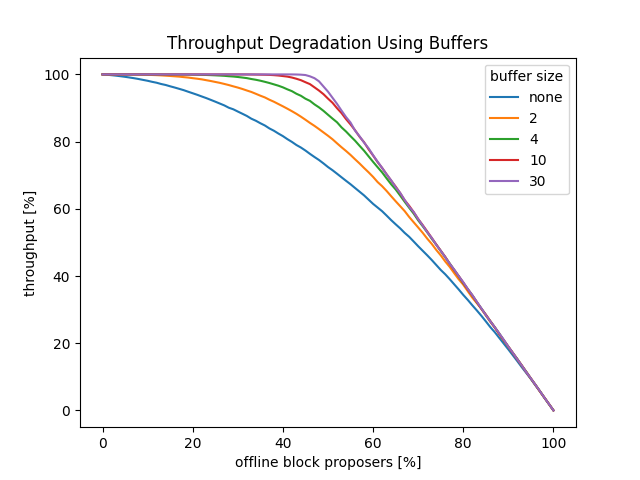 With an elasticity still at 2, there is no way of avoiding the eventual breakdown for more than 50% offline block proposers.

The main implementation complexity for this approach comes from the introduction of the buffer as a new persistent field. To retain the ability for calculating base fees only based on headers, it would have to be added to the block header.

In addition to the introduction of a buffer, increasing the block elasticity is another tool for increasing throughput robustness. The following diagram shows the effect of different elasticity levels, both in the presence and absence of a persistent buffer: 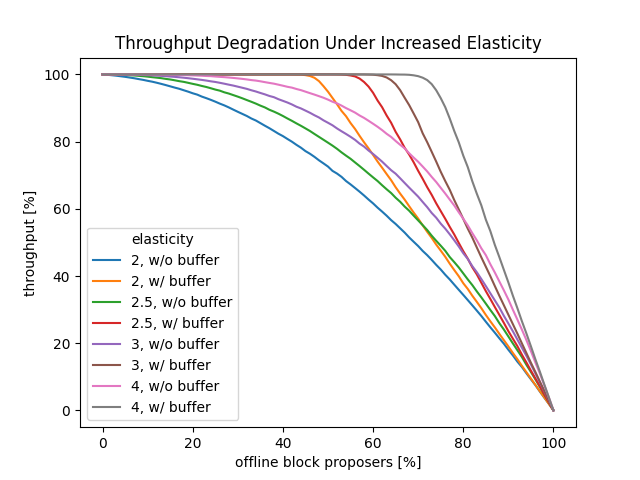 Again, a clear positive effect can be observed.

The EIP has minimal impact on backwards compatibility, only requiring updates to existing base fee calculation tooling.

Under PoW, miners are in control over the timestamp field of their blocks. While there are some enforced limits to valid timestamps, implications regarding potential timestamp manipulation are nontrivial and remain unexplored for this EIP.

Under PoS, each slot has a fixed assigned timestamp, rendering any timestamp manipulation by block proposers impossible.

As discussed in the rationale, a high value for MAX_GAS_TARGET_PERCENT during times of many offline block proposers results in a small remaining signal space for genuine demand increases that should result in base fee increases. This in turn decreases the cost for block proposers for suppresing these base fee increases, instead forcing the fallback to a first-price priority fee auction.

While the arguments of incentive incompatibility for base fee suppression of the the base EIP-1559 case still apply here, with a decreasing cost of this individually irrational behavior the risk for overriding psychological factors becomes more significant.

Even in such a case the system degradation would however be graceful, as it would only temporarily suspend the base fee burn. As soon as the missing block proposers would come back online, the system would return to its ordinary EIP-1559 equilibrium.