The Smart Derivative Contract is a deterministic protocol to trade and process financial derivative contracts frictionless and scalable in a completely automated way. Counterparty credit risk ís removed. Known operational risks and complexities in post-trade processing are removed by construction as all process states are fully specified and are known to the counterparties.

By their very nature, so-called “over-the-counter (OTC)” financial contracts are bilateral contractual agreements on the exchange of long-dated cash flow schedules. Since these contracts change their intrinsic market value due to changing market environments, they are subject to counterparty credit risk when one counterparty is subject to default. The initial white paper describes the concept of a Smart Derivative Contract with the central aim to detach bilateral financial transactions from counterparty credit risk and to remove complexities in bilateral post-trade processing by a complete redesign.

Concept of a Smart Derivative Contract

A Smart Derivative Contract is a deterministic settlement protocol which has the same economic behaviour as a collateralized OTC Derivative. Every process state is specified; therefore, the entire post-trade process is known in advance. A Smart Derivative Contract (SDC) settles outstanding net present value of the underlying financial contract on a frequent basis. With each settlement cycle net present value of the underlying contract is exchanged, and the value of the contract is reset to zero. Pre-Agreed margin buffers are locked at the beginning of each settlement cycle such that settlement will be guaranteed up to a certain amount. If a counterparty fails to obey contract rules, e.g. not provide sufficient prefunding, SDC will terminate automatically with the guaranteed transfer of a termination fee by the causing party. These features enable two counterparties to process their financial contract fully decentralized without relying on a third central intermediary agent. The process logic of SDC can be implemented as a finite state machine on solidity. An EIP-20 token can be used for frictionless decentralized settlement, see reference implementation. Combined with an appropriate external market data and valuation oracle which calculates net present values, each known OTC derivative contract is able to be processed using this standard protocol.

A counterparty can initiate a trade by providing trade data as string and calling inceptTrade and initial settlement data. Only registered counteparties are allowed to use that function.

A counterparty can confirm a trade by providing the identical trade data and initial settlement information, which are already stored from inceptTrade call.

This method checks whether contractual prefunding is provided by both counterparties as agreed in the contract terms. Triggers a contract termination if not.

Allows eligible participants (such as counterparties or a delegated agent) to initiate a settlement.

Allows an eligible party to request a mutual termination

The following events are emitted during an SDC trade livecycle.

Emitted when trade is activated

Emitted when termination request is initiated by a counterparty

Emitted when termination request is confirmed by a counterparty

Emitted when trade is terminated

The following events are emitted during SDC’s process livecycle.

Emitted when funding phase is initiated

Emitted when a settlement is initiated - method ‘initiateSettlement’

The interface design and reference implementation are based on the following considerations: 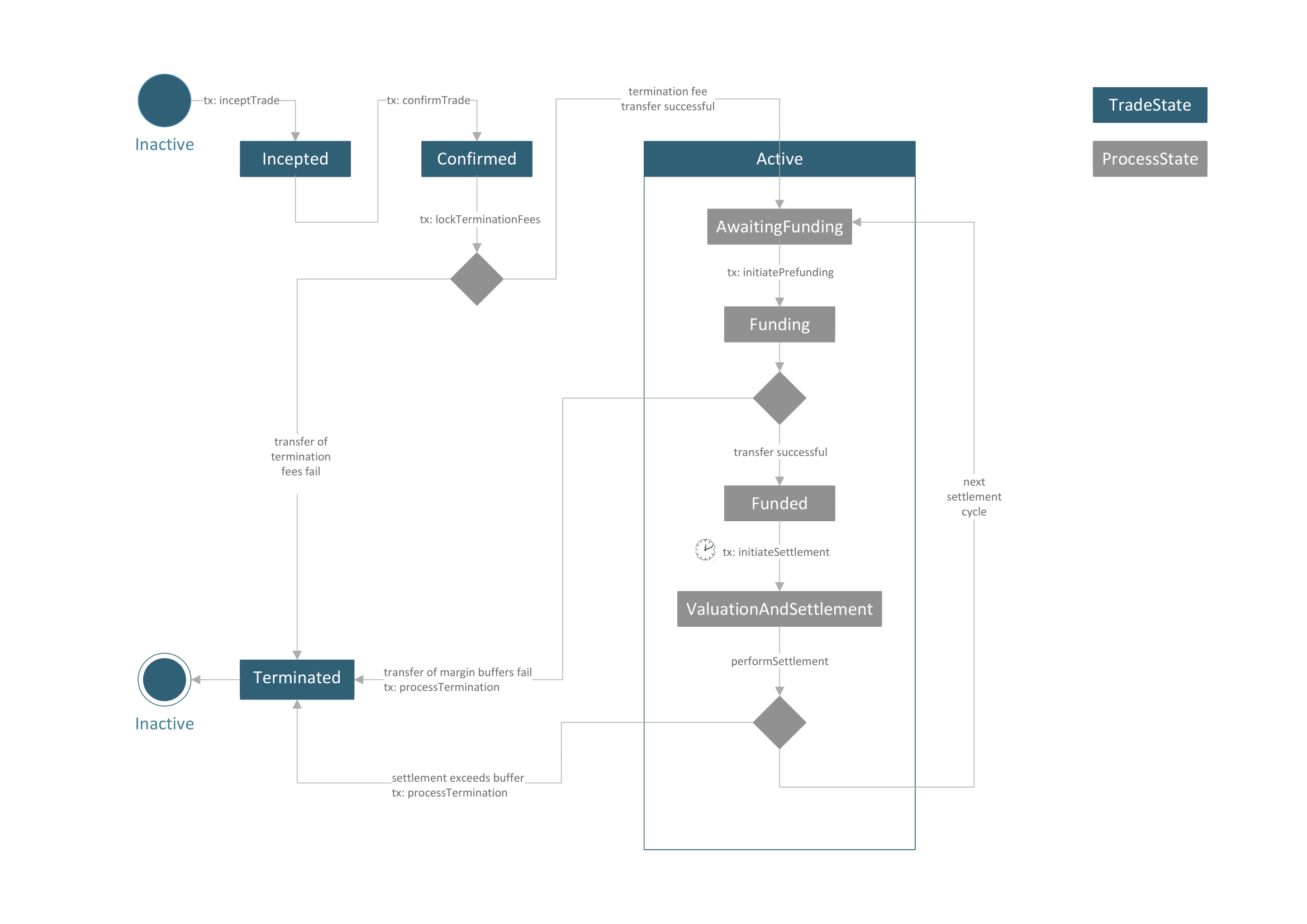 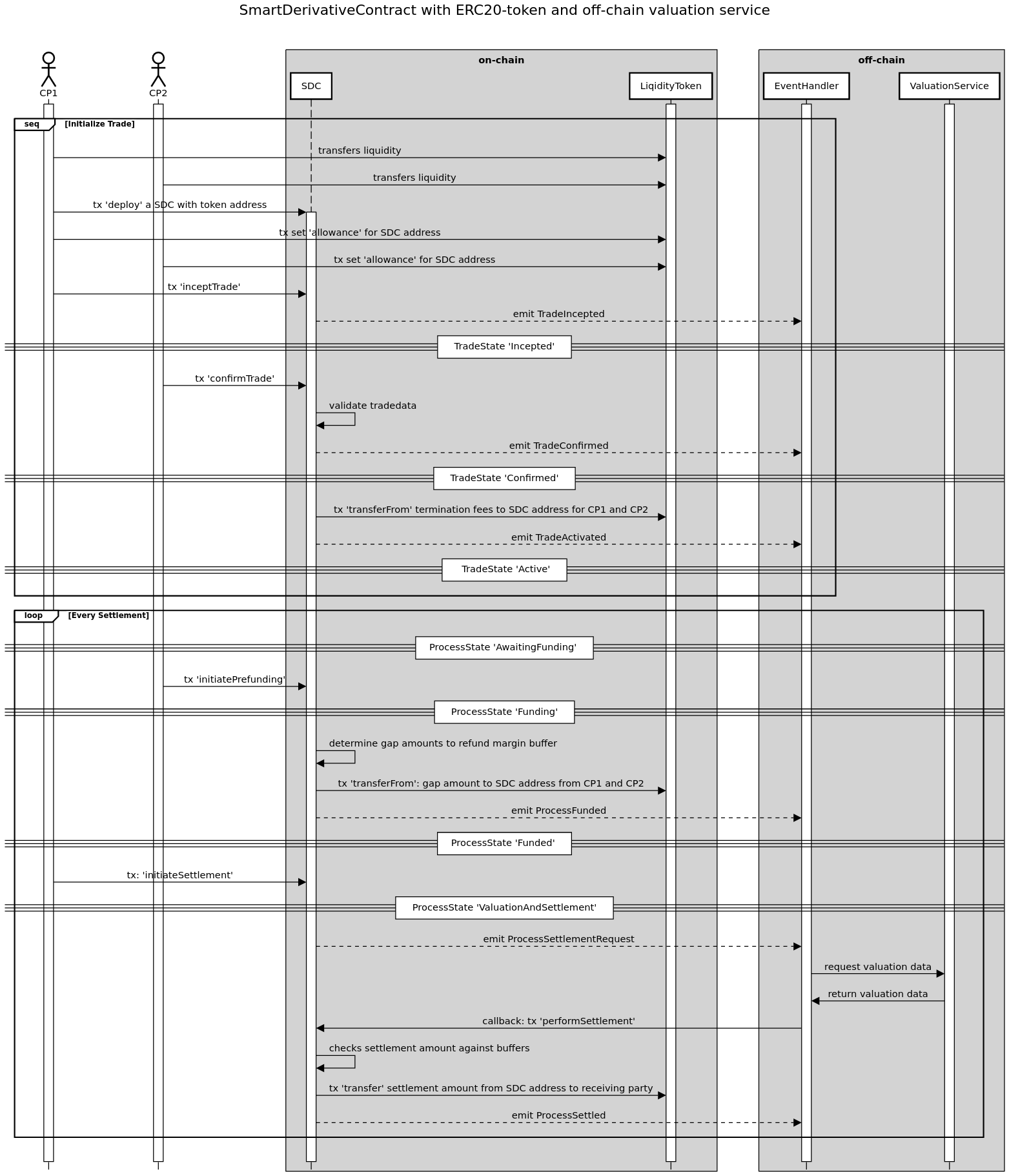 Live-cycle unit tests based on the sample implementation and usage of EIP-20 token is provided. See file test/SDC.js ).

Please take a look at the provided xml file as a suggestion on how trade parameters could be stored.

No known security issues up to now.