⚠️ This EIP is not recommended for general use or implementation as it is likely to change.

An account abstraction proposal which completely avoids the need for consensus-layer protocol changes. Instead of adding new protocol features and changing the bottom-layer transaction type, this proposal instead introduces a higher-layer pseudo-transaction object called a UserOperation. Users send UserOperation objects into a separate mempool. A special class of actor called bundlers (either miners, or users that can send transactions to miners through a bundle marketplace) package up a set of these objects into a transaction making a handleOps call to a special contract, and that transaction then gets included in a block.

See also “Implementing Account Abstraction as Part of Eth 1.x” and the links therein for historical work and motivation, and EIP-2938 for a consensus layer proposal for implementing the same goal.

This proposal takes a different approach, avoiding any adjustments to the consensus layer. It seeks to achieve the following goals:

To avoid Ethereum consensus changes, we do not attempt to create new transaction types for account-abstracted transactions. Instead, users package up the action they want their wallet to take in an ABI-encoded struct called a UserOperation:

Users send UserOperation objects to a dedicated user operation mempool. A specialized class of actors called bundlers (either miners running special-purpose code, or users that can relay transactions to miners eg. through a bundle marketplace such as Flashbots that can guarantee next-block-or-never inclusion) listen in on the user operation mempool, and create bundle transactions. A bundle transaction packages up multiple UserOperation objects into a single handleOps call to a pre-published global entry point contract.

The core interface of the entry point contract is as follows:

The core interface required for a wallet to have is:

In the execution loop, the handleOps call must perform the following steps for each UserOperation: 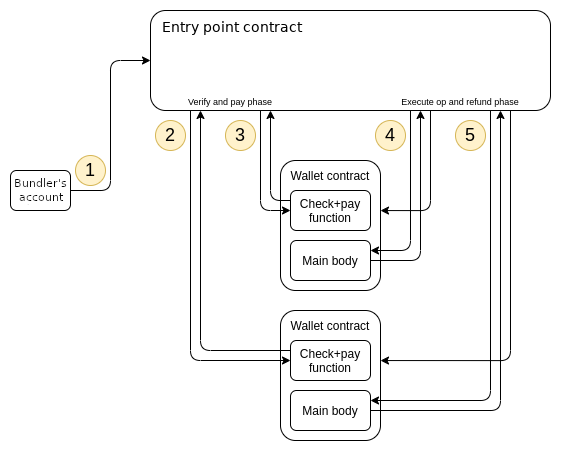 Before accepting a UserOperation, bundlers must use an RPC method to locally simulate calling the simulateWalletValidation function of the entry point, to verify that the signature is correct and the operation actually pays fees; see the Simulation section below for details.

We extend the entry point logic to support paymasters that can sponsor transactions for other users. This feature can be used to allow application developers to subsidize fees for their users, allow users to pay fees with ERC-20 tokens and many other use cases. When the paymaster is not equal to the zero address, the entry point implements a different flow:

Maliciously crafted paymasters can DoS the system. To prevent this, we use a paymaster reputation system; see the reputation, throttling and banning section for details.

The paymaster interface is as follows:

To prevent attacks involving malicious UserOperation objects listing other users’ wallets as their paymasters, the entry point contract must require a paymaster to call the entry point to lock their stake and thereby consent to being a paymaster. Unlocking stake must have a delay. The extended interface for the entry point, adding functions for paymasters to add and withdraw stake, is:

Client behavior upon receiving a UserOperation

When a client receives a UserOperation, it must first run some basic sanity checks, namely that:

If the UserOperation object passes these sanity checks, the client must next simulate the op, and if the simulation succeeds, the client must add the op to the pool. Simulation must also happen during bundling to make sure that the storage accessed is the same as the accessList that was saved during the initial simulation.

To simulate a UserOperation op, the client makes an eth_call with the following params:

If the call returns an error, the client rejects the op.

The simulated call performs the full validation, calling both wallet.validateUserOp and (if specified) paymaster.validatePaymasterUserOp The two operations differ in their opcode banning. In order to distinguish between the two, there is a single call to NUMBER opcode (block.number), so the client can run “wallet valiation” on the first half, While simulating, the client should make sure that:

If a contract (i) does not contain the SELFDESTRUCT or DELEGATECALL opcode [except perhaps inside pushdata] and (ii) has nonempty code, mutable state of that contract is defined as storage slots (accessed with SLOAD or SSTORE). If a contract does not satisfy either of the above conditions, mutable state of that contract includes code and storage. Note that balance can not be read in any case because of the forbidden opcode restriction. Writing balance (via value-bearing calls) to any address is not restricted.

In practice, restrictions (2) and (3) basically mean that the only external accesses that the wallet and the paymaster can make are reading code of other contracts if their code is guaranteed to be immutable (eg. this is useful for calling or delegatecalling to libraries).

If any of the three conditions is violated, the client should reject the op. If both calls succeed (or, if op.paymaster == ZERO_ADDRESS and the first call succeeds) without violating the three conditions, the client should accept the op. On a bundler node, the storage keys accessed by both calls must be saved as the accessList of the UserOperation

The forbidden opcodes are to be forbidden when depth > 2 (i.e. when it is the wallet, paymaster, or other contracts called by them that are being executed). They are: GASPRICE, GASLIMIT, DIFFICULTY, TIMESTAMP, BASEFEE, BLOCKHASH, NUMBER, SELFBALANCE, BALANCE, ORIGIN, GAS. They should only be forbidden during verification, not execution. These opcodes are forbidden because their outputs may differ between simulation and execution, so simulation of calls using these opcodes does not reliably tell what would happen if these calls are later done on-chain.

Reputation scoring and throttling/banning for paymasters

Clients maintain two mappings with a value for each paymaster:

We define the status of a paymaster as follows:

Stated in simpler terms, we expect at least 1 / MIN_INCLUSION_RATE_DENOMINATOR of all ops seen on the network to get included. If a paymaster falls too far behind this minimum, the paymaster gets throttled (meaning, the client does not accept ops from that paymaster if there is already an op from that paymaster, and an op only stays in the pool for 10 blocks), If the paymaster falls even further behind, it gets banned. Throttling and banning naturally reverse over time because of the exponential-moving-average rule.

Non-bundling clients and bundlers should use different settings for the above params:

To help make sense of these params, note that a malicious paymaster can at most cause the network (only the p2p network, not the blockchain) to process BAN_SLACK * MIN_INCLUSION_RATE_DENOMINATOR / 24 non-paying ops per hour.

The main challenge with a purely smart contract wallet based account abstraction system is DoS safety: how can a miner including an operation make sure that it will actually pay fees, without having to first execute the entire operation? Requiring the miner to execute the entire operation opens a DoS attack vector, as an attacker could easily send many operations that pretend to pay a fee but then revert at the last moment after a long execution. Similarly, to prevent attackers from cheaply clogging the mempool, nodes in the P2P network need to check if an operation will pay a fee before they are willing to forward it.

In this proposal, we expect wallets to have a validateUserOp method that takes as input a UserOperation, and verify the signature and pay the fee. This method is required to be almost-pure: it is only allowed to access the storage of the wallet itself, cannot use environment opcodes (eg. TIMESTAMP), and can only edit the storage of the wallet, and can also send out ETH (needed to pay the entry point). The method is gas-limited by the verificationGas of the UserOperation; nodes can choose to reject operations whose verificationGas is too high. These restrictions allow miners and network nodes to simulate the verification step locally, and be confident that the result will match the result when the operation actually gets included into a block.

The entry point-based approach allows for a clean separation between verification and execution, and keeps wallets’ logic simple. The alternative would be to require wallets to follow a template where they first self-call to verify and then self-call to execute (so that the execution is sandboxed and cannot cause the fee payment to revert); template-based approaches were rejected due to being harder to implement, as existing code compilation and verification tooling is not designed around template verification.

Paymasters facilitate transaction sponsorship, allowing third-party-designed mechanisms to pay for transactions. Many of these mechanisms could be done by having the paymaster wrap a UserOperation with their own, but there are some important fundamental limitations to that approach:

The paymaster scheme allows a contract to passively pay on users’ behalf under arbitrary conditions. It even allows ERC-20 token paymasters to secure a guarantee that they would only need to pay if the user pays them: the paymaster contract can check that there is sufficient approved ERC-20 balance in the validatePaymasterUserOp method, and then extract it with transferFrom in the postOp call; if the op itself transfers out or de-approves too much of the ERC-20s, the inner postOp will fail and revert the execution and the outer postOp can extract payment (note that because of storage access restrictions the ERC-20 would need to be a wrapper defined within the paymaster itself).

It is an important design goal of this proposal to replicate the key property of EOAs that users do not need to perform some custom action or rely on an existing user to create their wallet; they can simply generate an address locally and immediately start accepting funds.

This is accomplished by having the entry point itself create wallets using CREATE2. The UserOperation struct has an initCode field; this field would be empty for all operations by a given wallet after the first, but the first operation would fill in the initCode. The entry point uses EIP-2470 deployer contract to create the wallet, and then performs the operation. The user can compute the address of their wallet by locally running the EIP 1014 CREATE2 address formula. The salt used is the nonce of the UserOperation. (The entry point contract has a utility method getSenderAddress() for that purpose)

Wallets are encouraged to be DELEGATECALL forwarding contracts for gas efficiency and to allow wallet upgradability. The wallet code is expected to hard-code the entry point into their code for gas efficiency. If a new entry point is introduced, whether to add new functionality, improve gas efficiency, or fix a critical security bug, users can self-call to replace their wallet’s code address with a new code address containing code that points to a new entry point. During an upgrade process, it’s expected that two mempools will run in parallel.

This ERC does not change the consensus layer, so there are no backwards compatibility issues for Ethereum as a whole. Unfortunately it is not easily compatible with pre-ERC-4337 wallets, because those wallets do not have a validateUserOp function. If the wallet has a function for authorizing a trusted op submitter, then this could be fixed by creating an ERC-4337-compatible wallet that re-implements the verification logic as a wrapper and setting it to be the original wallet’s trusted op submitter.

The entry point contract will need to be very heavily audited and formally verified, because it will serve as a central trust point for all ERC 4337 wallets. In total, this architecture reduces auditing and formal verification load for the ecosystem, because the amount of work that individual wallets have to do becomes much smaller (they need only verify the validateUserOp function and its “check signature, increment nonce and pay fees” logic) and check that other functions are msg.sender == ENTRY_POINT gated (perhaps also allowing msg.sender == self), but it is nevertheless the case that this is done precisely by concentrating security risk in the entry point contract that needs to be verified to be very robust.